ALL MEMBERS OF 2745
​
There have been a number of questions and concerns that have surfaced so we are going to try to clear them up regarding the upcoming negotiation tour.

·        As per practice, voting should be done in the region that you work (in accordance with the Bylaws)

This is due to the fact that this is a “legal” vote and we MUST report it to the Labor Board. In order for us to be able to keep track of who voted, it is easier to do it using the seniority lists for the regions. Also, we are trying to keep the numbers attending each
meeting the same or close to it so that the venue of the meeting will hold everyone and that all will have the opportunity to ask questions. Not to mention trying to keep the length of the meeting reasonable and everyone has a lot going on at this time a year

·        The presentation meetings ALL start at 6pm with voting to follow commencing approximately 7pm.

·         The Ratification Vote: this vote is for the acceptance OR rejection of your new collective agreement. The vote is based on the number of members that attend and vote . Within those numbers we must, have a 50% plus 1 (simple majority) for the acceptance or rejection of the proposed collective agreement. For those that choose not to attend/vote, their vote is
not counted.

We, as your Executive and Negotiation team have been diligently working since last Tuesday at noon when we reached a tentative agreement, trying to ensure that the ratification document is accurate before we present it for your decision AND as you
heard today about the Pay Equity we have been waiting for the Classification and Compensation Dept. of the government to send us the spreadsheet that will be presented at the meetings. It was our hope to have these meetings sooner but we needed to get the work done, ensure it was accurate and we do not control others workload!

Message from our Provincial President

It is with appreciation and recognition that I acknowledge the patience, hard work, determination and commitment of our negotiation team in reaching a tentative agreement. The support and confidence that you, members,  instilled in us to keep pushing allowed us to forge ahead. It has been a long, hard, 3 years plus, but we have finally achieved an end result.

We can not release details at this time, but they will be out soon and we will be coming out for a ratification vote.

We have been called back to the table today and further details will follow. 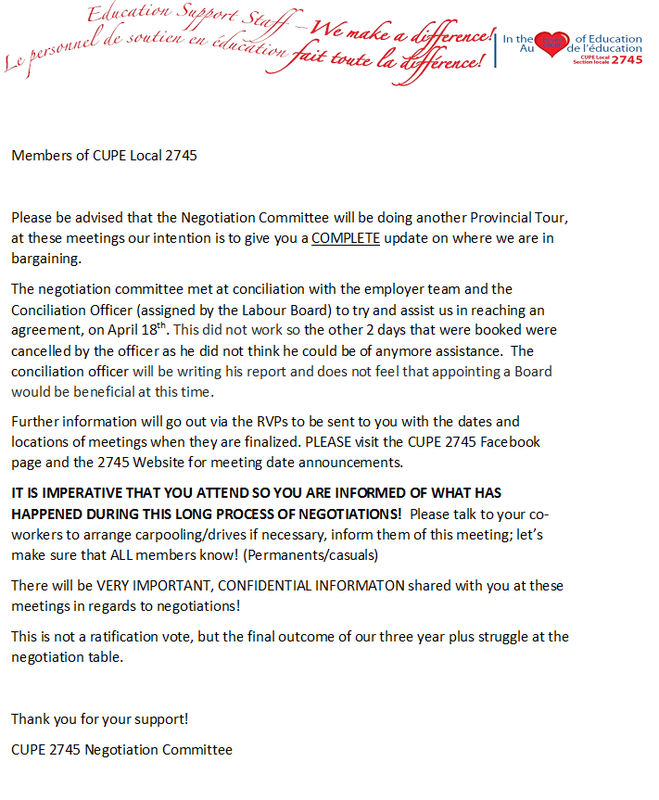 We have been confirmed for conciliation at the Crown Plaza at 9:30 am for April 18,19 and


Members of CUPE 2745, we feel and hear your frustrations but we are in the process of conciliation. We have agreed to an extension until March 18 due to a family emergency of one of the team members. We will resume the process as soon as possible after that date. We are still awaiting word on a conciliator.

Our process for Pay Equity has been completed since October 2015 and we are awaiting answers from
the Board of Management. We are in constant contact with the Director of Human Resources regarding the status of Pay Equity.

Thank you for your continuous support and patience!

We are returning to the negotiation table on February 8 and have the whole week set aside for it.